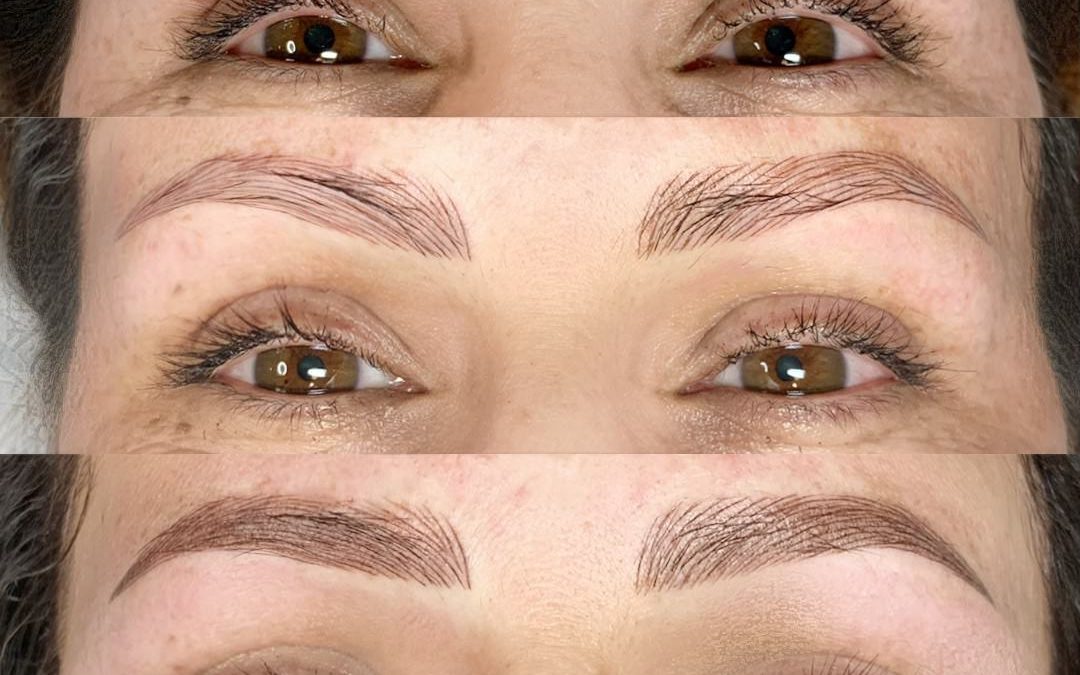 She arrived a bit rigid and tense. But her freckled cheeks were coated with happy tears as she left.

Beauty is subjective, and inevitably, laced with bias.

Yet there is another inevitable truth that is worthy of mention: “when you look good, you feel good.”

What one may consider a pursuit of vanity, is to another an essential aspect of their self-care — even their mental wellness. To each their own, right?

In this case study, it’s clear that the client’s desire to receive this Permanent Makeup procedure (also known as PMU) was most definitely more on the ‘essential’ side of the spectrum.

While the realm of PMU contains a nearly infinite scope of different services, styles, and subdivisions, the branches that can have the most impact on quality of life are Paramedical and Restorative Tattooing.

Alopecia Areata: A battle for self-reclamation

Alopecia is an autoimmune disease in which the body to attacks the cells of its hair follicles. This causes the hair to fall out, often in clumps, and sometimes permanently.

Severity and hair region can vary among individuals, but the areas of hair loss that cause the most distress tend to be the eyelashes, brows, and scalp.

After all, our face is more than just a body part; it is the physical embodiment of our identity.

I have had countless clients over the years who have sought my services due to their struggle with Alopecia. The energy when they connect with me is always laden with a palpable vulnerability — much more so than someone coming in for an “enhancement” of their features, such as a Winged Eyeliner or a Lip Blush Tattoo.

This feels more like a pilgrimage… to seek the restoration of something that was lost.

Wounds from the battle field of beauty standards

Modern beauty standards are already difficult to grapple with. And a disorder like Alopecia can undoubtedly exacerbate that feeling of inadequacy, tenfold.

As far as the brows go, we have all seen memes on the internet which highlight the importance of brows, and how one’s face can really look a bit… obscure, when they are removed using tools such as Photoshop.

It should also be noted that thinned-out brows can make us look as though we have aged. This is a natural and reflexive visual assumption that our brains detect, similar to sensing a certain amount of elasticity and suppleness in a face, versus a certain amount of wrinkles. It is a subconscious series of calculations that occurs when we witness another human being, taking in all of their features. Since we tend to lose both collagen and keratin (hair) volume as we age, having less brow hair makes us look a bit aged and/or tired.

From 2016–2019 I toured my services across multiple cities. I had tattooed this particular client’s sister during a Guest Spot visit among my travels. She had seen that my work healed well and was intrigued, so she came along to watch her sister’s secondary (touch-up) appointment.

I could tell that she was skeptical, yet hopeful. She later confessed to me that she was extremely hesitant to get her brows tattooed, given that she had already tried countless remedies such as Castor Oil, Latisse, and even steroidal injections to induce hair growth in her brow region. Unfortunately, none of it had worked in restoring her brow hairs.

In her words, her face was “naked” without her brows. She was never the type to use substantial makeup every day, nor was she able to draw an accurate or flattering shape, as she didn’t have anything to base it off of.

Stripped of her femininity and feeling defeated by these unpromising attempts, she had essentially lost hope. Subsequently, her self-esteem was quite negatively affected. She told me that she wore hats as often as possible.

It broke my heart to hear her say that.

In a last attempt, she pulled the trigger and added herself to my waitlist. And I am so humbled that she put her faith in me, given everything that she had already gone through.

A white flag, and a shot in the dark

My client waited over a year for me to return to the city. Despite waiting this hefty duration of time, and seeing a healed example of my work, she arrived with a cynical energy, tense, and full of doubt. I knew that I was dealing with a case that was laced with trauma and pain. I knew I had to tread lightly… with as much softness and grace as possible.

As we all know, personal services, especially ones that can constitute a permanent or semi-permanent change to our faces (an extension of our identities), come with an inevitable undertone of vulnerability from the client. Over my 5 years as a PMU artist, I have come to expect this as only natural, and I never take it personally.

That said, due to the nature of my work, I am not only an artist. I am a counselor and therapist of sorts. I use very specific wording and tonality in order to both dutifully inform and gain the trust of my clients. It’s important to me that I am not only empathetic and receptive to their fears, but that they assured they are ultimately in good, safe, and caring hands.

It is an honor to be trusted in this way. Truly. I do not take it lightly, and I recognize that the trust instilled in me is somewhat sacred.

A meticulous, mathematical, and emotional resurrection

I blocked off extra time with this client, knowing that we were about to make massive change to, essentially, her entire being. I consulted with her at length and walked her through every step of the process beforehand, ensuring we covered all bases of concern.

I had asked her to bring in reference photos, and I wasn’t surprised when she simply showed me pictures of how her brows “used to be”.

This is very common among my clients with Alopeica; it is not a matter of glamour or wanting celebrity eyebrows.

They simply want to reclaim what they once had.

My process involves a lot of measuring, trigonometry, and experimentation in order to see how a design fits with the “flow” of the face. My canvas is, after all, 3-Dimensional; living, breathing — and even stretchy. What may work on someone’s face will not work for another, and even a millimeter margin can create a noticeable error.

I employ techniques involving the Golden Mean, a naturally occurring mathematical ratio that exists all throughout nature, such as in our fingertips, DNA, whirlpools, galaxy structures, and then some. I tend to “zone out” when I’m in the design state, and try to “listen” with my eyes rather than force a result. Everything from the client’s bone structure and complexion speak to me; all I need to do is harness that reflection.

I worked off of her reference but also through my own vision. Though her body language was still filled with tension, we eventually secured the design stencil and moved onto numbing her skin. A bit scarred and toughened from the injections, I knew I had to let the topical cream penetrate for a few extra minutes before moving forward.

So, WTF is a Combo Brow?

I knew that a “Combination Brow” technique would be the best fit for my client’s needs. “Combination” means to combine two methods of tattooing, “Strokes” and “Shading”, respectively.

There are different types of Combo Brows I offer, but the most natural is referred to as a “Blade & Shade, which I opted for in this particular case.

2. Shading, for density: “Pepper-shading” is the use of a PMU tattoo machine wherein the needle is “whipped” to create a soft granulation effect. In the photos below, you can see why the shading is crucial to creating a more realistic look. The reason this was necessary in this case was to build density, as the canvas was nearly blank, with no natural hairs. Strokes should never be placed too close together as they can blur and blotch once healed, which can quell the efforts to create “strokes” in the first place.

Together, these two methods combined are what will create a natural and seamless flow, ideal for optimal healing, and the most hyper-realistic result.

For the first session, I always like to be a bit conservative. I space my strokes out somewhat liberally to account for possible pigment spread during healing, and I choose a color that is slightly lighter than necessary, as we can always go darker at the touch-up — but not lighter. There is always a psychological adjustment period after the initial session, so it’s best to start gently and simply add as needed.

I worked slowly, almost therapeutically, on these brows. I took my time. Her skin was difficult to work with, as I anticipated.

But the effort was beyond worth it.

When I passed her the mirror, I held my breath. My client was not the type to display emotion up till this moment, but my heart swelled as I witnessed the tears that rushed to her eyes. Despite some remnants of constriction in her body language, she thanked me a million times, holding back her tears. I could see that in the mirror, she recognized herself again.

On her way out, she abruptly turned around, hugged me tightly for a brief moment, and rushed out the door.

Few moments in my career have been as gratifying, as I know that this was much more than just a “beauty service”. It was a reclamation, a resurrection, and a restoration of power to a woman who can now show up more confidently in the world and in all she does.

I consider myself incredibly blessed to do this work, and all the trust that is instilled in me is a gift. I am forever grateful.

This site uses Akismet to reduce spam. Learn how your comment data is processed.